Sergeant Franklin Paddock was a soldier in Hartsock's 2nd Squad. He was leader of the Assault team and was promoted to Sergeant and leader of 2nd Squad when Hartsock was paralyzed and sent home.

Despite being somewhat arrogant and reckless, he is the capable and courageous assault team leader for second squad.

Born in Kansas in 1923 along with a sister (who spent a lot of time on her back), Paddock is an abrupt, reckless and arrogant farmer with a very strong southern accent. He barely got into the airborne because of being a loud-mouthed hothead, but after he joined the 101st Airborne Division and his problems with authorities ceased.

He was eventually moved to England with the rest of his unit to train for the initial invasion of Normandy, "Operation Overlord." At this time Paddock was a Corporal and lead 2nd Squad's Assault team.

Paddock is first seen in the night of D-Day, as he takes out an AA crew single-handed. He then joins Hartsock and stays with him throughout the game, leading the assault-team. Even through all of this Paddock maintains himself as a strong leader.

Throughout the invasion of Normandy, Paddock's and the second squad's story is told by Hartsock to Army historian S.L.A. Marshall. The first half of the story tells about missions that happened in between the normal missions in Road to Hill 30. Due to the terrible misdrops the airborne suffered Paddock was often stuck with members of 3rd Squad, mostly Red Hartsock and Corporal Sam Corrion. He was forced to cooperate with some men from the other squads until after the battle of Hill 30, which lead to some reorganization in the squads' formations. This was mostly due to the fact that 2nd Squad's Sergeant was killed during the drop.

During D-Day, Hartsock, along with Corporal Seamus Doyle witnessed Paddock shooting by himself a whole crew off an AA gun with his M3A1 Grease gun. After that, the three men linked up with Lt. Col. Robert Cole and Cole asked Paddock from which unit they came from. Paddock answered: "Kansas, sir".

After Hartsock is promoted to 2nd Squad's leader the left overs from 1st Squad (Cpl. Jacob Campbell, Private William Paige, and Pvt. Derrick McConnel) and Paddock finally had a whole assault team. In fact, the only survivors of the second squad were Paddock, Winchell and Marsh.

Paddock helped to clear Sgt. Hassay's flank during the defense of Hill 30, and finally helped Cpl. Doyle and the 82nd to capture and clear the strategically important city of St. Sauveur, France.

It was D-Day+10, Hartsock's squad was to clear the town of St.Savuer. Paddock was convinced that they would have met some 88s but nobody seemed to believe him. They found out he was right, and various 88s and AT guns could have blown up the tank that accompanied them.

Unfortunately while in St. Sauveur he witnesses Doyle get vaporized by a tank shell from a Panzer IV tank. Paige saved Hartsock's life by pulling him out of the line of fire. Paddock gave them covering fire with the rest of the squad.

In September, 1944, the platoon (now re-established with replacements and made one of the 101st's "Recon squads") took part in Operation Market Garden, an operation which ultimately failed.

Paddock fights along Baker in several missions during Hell's Highway. Towards the end of the game when Hartsock is wounded and sent home, Paddock is chosen by Baker to be 2nd squad leader over Corrion, Campbell and Zanovich. He saved Baker's life by throwing the sniper that killed Lieutenant Colonel Cole out the window as he was about to stab Baker.

During the battle in Eindhoven, Friar was killed when a mortar hit the cafe, with Hartsock being left as a paraplegic. Afterwards, Paddock was given an emergency promotion to Sergeant after Col. Sink encouraged Baker to fix the gap in command to keep the recon squads operational. He is then seen in "Tooth and Nail" As part of your Assault Team.

At no point during D-Day did Paddock have his full Assault Team which would have included Private "Friar" Winchell and someone else that apparently got killed during D-Day, including the Sergeant that led the squad. During the first few days of the operation Paddock led Private Winchell under Corporal Hartsock's command until Hartsock was made Sergeant and commander of the second squad. Finally, Paddock's Assault Team was formed by Pvt. Winchell, Pvt. McConnel and himself.

Even through all of this Paddock maintains himself as a strong leader and even though his incredible feats during D-Day he was not promoted to Sergeant after the defense of Hill 30 and after the battle of Carentan, Baupte and St.Savuer. 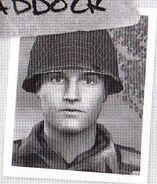 Paddock as he appeared during the night of the drop.
Add a photo to this gallery

Retrieved from "https://brothersinarms.fandom.com/wiki/Franklin_Paddock?oldid=24505"
Community content is available under CC-BY-SA unless otherwise noted.