Brothers in Arms Wiki
Register
Don't have an account?
Sign In
Advertisement
in: Characters, Road to Hill 30 Characters, Earned in Blood Characters,
and 2 more
English

Jeff Kribs
First Sergeant Gregory Hassay, commonly known as 'Mac', was a platoon sergeant for 3rd Platoon which includes 2nd and 3rd Squads during the Normandy Campaign. He is later promoted to First Sergeant and attached to Lt Col. Cole's unit.

Mac has been a professional soldier since the 1930's and knows his trade inside out. He has served all over the world and volunteered for the Airborne in 1942. He is dedicated, committed and an expert with all infantry weapons and a superb 'lead by example' Platoon sergeant. Mac will not let his men in his platoon down. He is very proud to be a paratrooper and the 101st and his 3rd platoon.

He served with Colonel Joseph Baker, Matthew Baker's father at Fort Benning in Georgia in 1939. When Mac was a rifle and machine gun man instructor at the infantry school and he and Colonel Baker were instructors of infantry tactics. Baker's father saved Mac's life in a demolitions training exercise at Fort Benning. As a result, Mac respects Baker's father and looks at Matt as a leader with potential and to carry on in his father's footsteps.

Hassay enlisted in the Army in 1930 and by 1939 was a full Sergeant. He was eventually deployed to England with the rest of his unit to train for the initial invasion of Normandy, Operation Overlord. He served as Platoon Sergeant for 3rd platoon of Fox Company. When Fox jumped on June 6, 1944, one of two C-47 transport planes carrying the platoon was shot down by antiaircraft fire and Lieutenant Jackson, in command of 3rd Platoon, was killed. Hassay took command when Jackson never turned up, and after the officer's death was discovered, he remained as acting platoon leader for the remainder of the fighting in Normandy. By the time of September 1944 and the start of Operation Market Garden, Hassay had been promoted from staff sergeant (E-6) to first sergeant (E-8), serving as Fox Company's senior NCO.

Playing a lead role in the game, Mac is first seen during the night of D-Day, as he finds Baker after the drop. He briefs Baker on his missions through the whole of Road to Hill 30. Mac is mostly seen in every level, usually with Pfc. Kevin Leggett. Mac promotes Cpl. Hartsock to Sgt. at the end of the game.

In Earned in Blood, Hassay is first seen during "Three Patrol Action" covering Hartstock's squad as they cross an open field. He plays a minor role in the game and isn't seen very often. He is wounded by a rifle shot in the stomach shortly after the German counter attack at Carentan.

He was promoted to first sergeant much to the dismay of Courtland. He serves as an assistant to Lt. Col. Cole and is the First Sergeant of Fox Company. In the ending cutscene it is revealed that he too knew what happened to Leggett, Allen, and Garnett, when Baker tells him that he has told the rest of his men of the incident, he says, "Matt! I told you not to do that!" in surprise. 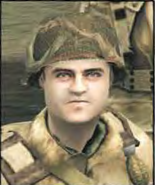 Mac in Road to Hill 30 Manual

Holding off the line as a German squad encloses on their ditch.