Private First Class Jack Courtland was an American paratrooper who participated in the Battle of Normandy and Operation: Market Garden.

Originally serving as a member of Third Squad's assault team under Sgt. Matt Baker, the whole platoon was transferred from the 502nd PIR to the 101st Airborne Division's pathfinders after France was secured.

Pfc. Jack Courtland was born in Richmond, Virginia and grew up as a baseball fan. Before the war, he had hopes of someday becoming a professional baseball player - specifically the catcher for the New York Yankees. He started the war with dreams of glory and wooing French girls with his tales of valour. His eagerness to be a hero quickly faded after being lost for days in Normandy. Little else is known of his childhood, though he described having his first kiss at the age of seventeen.

When the United States entered the war and conscription was enforced in December 1942, Courtland volunteered to serve as a paratrooper, believing he would easily woo Frenchwomen with tales of glory and valour.

Flying over Normandy as part of the D-Day drops, Courtland was separated from his platoon when their glider was hit by German anti-aircraft fire. Courtland finally found Sgt. Baker on D+5 at Highway N13, a river crossing outside Saint Come-du-Mont. There, he participated in the historic "Cole's Charge", where Lt. Col. Robert Cole led a smoked charge across a field to take a farmhouse.

The platoon moved into Carentan on June 13th (D+6) and assisted in defending a church from being reused by the Germans. On the next day they encountered German reinforcements a mile southwest. While most of the platoon was pinned down by Germans in a ditch, Courtland was sent out for an unspecified mission. This is speculative, given his lack of appearance in "Earned in Blood", where Hartsock's account of the battle begins right after Baker is first knocked out.

Ahead of the Allied invasion of the occupied Netherlands, the entirety of 3rd Platoon was transferred to the 101st's Reconnaissance Platoon, lead by now Staff Sergeant Baker.

During Operation Market Garden, he has a considerably bigger role in Hell's Highway. He alternates between the assault team and the support team, before replacing Corrion as assault team leader due to his injuries. He is moved to the special weapons team where he helps defend Connor and Jasper, whilst they are reloading. Courtland's job is to shoot any enemies that are targeting the MG or Bazooka. Courtland fights his way through the burning Eindhoven with the other members of the squad. 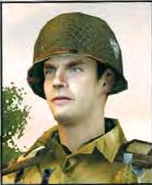 Courtland in Road to Hill 30 Manual 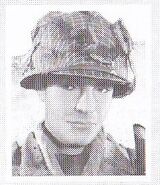 Retrieved from "https://brothersinarms.fandom.com/wiki/Jack_Courtland?oldid=24507"
Community content is available under CC-BY-SA unless otherwise noted.