Brothers in Arms Wiki
Register
Don't have an account?
Sign In
Advertisement
in: 3rd Squad, Characters, Killed in Action,
and 2 more
English

None
Private Johnny Rivas was a soldier in Baker's 3rd Squad. He and David Muzza are soldiers that are not used in Brothers in Arms: Road to Hill 30. He have a journal that he wrote down before his death in Purple Heart Lane.

Born in Texas in a Mexican family, Private Johnny Rivas was a member of the 3rd Squad's Scout Team. He was always seen by his comrades holding his sketchbook and pencil; he drew whatever was around him. Rivas said many times that he'd jump with more pencils than ammo so he would always remember what he saw around him. Art was his passion, and he had an extraordinary talent for drawing.

The afternoon before the parachute drop, on June 5th (D-day -1), Fox company made their final preparations for the night ahead and were greeted by General Eisenhower and Lt. Col. Robert Cole.

The planned was dropped when the 3.7 cm Flak cannons began firing at the gliders. The plane was hit; killing Muzza in the process. The plane's occupants began jumping out to escape the blaze; the confusion leading to Rivas collapsing on McCreary on the way out. Rivas' parachute would lead him far away from where the rest of the squad landed, finally regrouping with them around D-day+4 (June 10th).

At a river bank later known as "Purple Heart Lane", 3rd Squad came from behind a bakery. German snipers were all around and Rivas was shot by a sniper to the neck, piercing his jugular vein, he painfully bleeds and dies; Corrion frantically trying to help him, but Hartsock worrying more about the Germans. The squad then leaves Rivas' dead body and continues with the mission.

It is unknown what happened with his body (if the squad gave him a burial), however, there are several bodies under white sheets at the barn, and it is unknown if one of them is Rivas, but it is probably unlikely, as his body was a long way away from where they held the base.

You begin to play the game as Rivas has already been shot. It is unknown what happened before the death of Rivas, but if he hadn't had died, he would have ran with Baker in Cole's Charge and stayed at the barn with the other members of 3rd Squad.

Rivas have his own Journal,in which he wrote & draw... 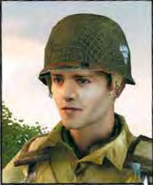 Rivas in Road to Hill 30 Manual

Here is Rivas in the clip; Nine Days Earlier, drawing.

Although he is not present in the story mode chapters, Rivas can be a member of your squad in several Road To Hill 30 custom maps, that are available to download from various websites (notably the Modified Buying The Farm map. He is a member of your fire team, and uses an BAR Rifle. He does not speak when walked up to however, because the writer's didn't require a voice actor for his character, as he only appeared once, and that was his death scene. This modified chapter/map is purely fictional, and is a designed map by an editor who has uploaded it online.