Brothers in Arms Wiki
Register
Don't have an account?
Sign In
Advertisement
in: Articles Needing Cleanup, Road to Hill 30, Earned in Blood,
and 9 more
English

He was a corporal in Normandy campaign before promoted to Sergeant to led the new 2nd Squad. He was paralyzed during the war and sent out of combat.

Before the war, he worked on a ranch in Wyoming and has hunted all his life. As a youth, he was wild and rebellious and gained a large scar during a bar fight with what he describes as "an angry lumberjack". He got alot of overnight arrests for his bar fights. He married a woman named Erma when they were both 21 and had a daughter with her just before being sent to basic training. It was from Erma that he became not only a more 'peaceful man, but God-fearing too.'

Emma did her best to calm him down and she did an admirable job. All he wanted to do was to protect his country and his family. So he signed up the toughest outfit he could find - the paratroopers. It was only once the war started and his friends started to die, he regretted leaving home in such a fragile state. He wanted to get himself and his men back to their families again.

He joined the 101st Airborne Division and was eventually deployed to England with the rest of his unit to train for the invasion of Normandy. At this time Hartsock was a Corporal and led 3rd Squad's Fire Team.

Hartsock is first seen in the morning of the invasion. He joins Baker shortly after Silence the Guns mission, and eventually finds his team and leads it. For most of the game, he fights alongside Baker in all of the missions they go on. At the end of Road to Hill 30 he is promoted to Sergeant, and is to lead 2nd Squad. On June 6 1944, Corporal Hartsock and his squad were paradropped behind enemy lines in Normandy.

During Road to Hill 30, Hartsock followed Sergeant Matt Baker through some of the bloodiest battles in the early days of the invasion. Most notably, Hartsock helped Baker secure "Objective XYZ" and the town of Vierville, paved the way for glider reinforcements, led his fire team through Purple Heart Lane, Lieutenant Colonel Robert Cole's charge, and the Battle of Carentan, and finally helped with the frantic and bloody defense of Hill 30.

Following the defense of Hill 30, Hartsock was promoted to Sergeant and became the Squad Leader of 2nd Squad.

Hartsock is now the protagonist of this game, the player can now control and experience Hartsock's story, although the timeline in almost the same as the first game. During his drop on D-Day, Hartsock's leg bag, which held his M1A1 Carbine was ripped from his leg, so he was unarmed when he touched down in France. Hartsock's parachute got entangled in a tree and as he dangled in mid-air a German soldier came across him. The German was about to kill him until he was cut down by rifle fire. Hartsock was saved by Corporal Seamus Doyle from the 82nd Airborne Division, who quickly became one of his best friends during the Normandy invasion.

In RtH30, the player has to defend the Hill 30, but in EiB, the player will take some of his men to attack from the rear, preventing further German reinforcements from entering the line. After Hartsock is promoted to 2nd Squad's leader the left overs from 1st Squad (Cpl. Jacob Campbell, Pvt. Will Paige, and Pvt. Derrick McConnel) are folded into 2nd as the squad's Fire Team. During the assault on Baupte, Hartsock's finger is blown off at the tip. Hartsock helps Baker push the remaining Germans out of Carentan, leads most of what was left of 3rd Platoon to clear out the unit's left flank during the defense of Hill 30, and finally helped Cpl. Doyle and the 82nd to capture and clear the strategically important city of St. Sauveur, France.

During an assault on the city of Baupte, France, Hartsock's ring finger is blown off at the tip and on top of this the stock of his BAR is shattered by a piece of shrapnel that took his finger. Coincidentally, he was the only married man in the squad.

While in St. Sauveur he witnesses his friend Doyle getting killed by a tank shell from a Panzer IV tank. The blast disoriented Hartsock, and Pvt. Paige (who had a sucking chest wound from a piece of the shell) used the last ounce of his strength to pull Hartsock to safety before dying right in front of him.

The only original people who were survivors of the second squad (pre D-Day) were Cpl. Paddock, Pfc. Winchell and Pfc. Marsh. Coincidentally Paddock was surprised that Marsh and Friar survived as they were both inexperienced. During Operation Market Garden, SSgt. Hartsock, Pfc. Marsh, Pfc. Winchell and even Cpl. Campbell are all either killed or wounded, leaving Cpl. Paddock the only original 2nd squad survivor.

In Hell's Highway Red once again plays a supporting role, assisting Baker throughout the game. He starts to confront Baker's hallucinations, wondering if it will limit him to fulfill his duties as squad leader.

In Hell's Highway, Hartsock and Baker take part in Operation Market Garden, the Allied invasion of Holland in September 1944.He still is desperate about getting home to meet his 2½ year old daughter Carol.

Hartsock leads a squad consisting of the survivors of 2nd Squad (Campbell, McConnell, Paddock, Friar, and Marsh) in addition to new replacements (Pfc. Jasper, Pfc. Conner, and Pvt. Roselli). On September 22nd, 1944, while in a small cafe in Veghel, Holland, Hartsock confronts Baker about his mental health, which has deteriorated since the events in Normandy. Once again, he was often armed with BAR, despite of his injuries in Earned in Blood. In some missions, he is armed with M1A1 Thompson.

While the two sergeants argue, a mortar shell hits the cafe and kills Friar, injures Campbell and Baker, and paralyzes Hartsock. Hartsock is sent home after the events in Hell's Highway. Baker tells him in the tent that he will never walk again. Cpl. Paddock is promoted to Sergeant and takes over 2nd Squad after Hartsock's injuries.

They become friends and partners as they join paratrooper school together with other friends who later join their squad. Red was a loyal friend and team mate as he is considered the unofficial second in command of 3rd Squad with his position as leader of Fire Team. It grew with the promotion of Sergeant and considered both partners instead of the officer-soldier relationship. Red still feels that Baker is his superior even though he is Sergeant. 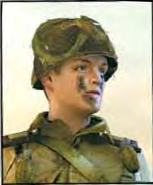 Hartsock in Road to Hill 30 Manual