Brothers in Arms Wiki
Register
Don't have an account?
Sign In
Advertisement
in: Characters, Road to Hill 30 Characters, Earned in Blood Characters,
and 4 more

"I understand the large hearts of heroes, the courage of present times..."
— Leggett's Poem

As the squad radio operator, he always accompanies S/Sgt. Hassay. His death at Hill 30 haunted Baker throughout the events of Operation Market Garden.

Leggett was born and raised in Brooklyn, New York. He joined the U.S. Army's 101st Airborne Division as a radio operator and was assigned to Fox Company's 3rd Platoon; "Fox-3". Leggett furthered his usefulness in Normandy with his ability to speak French.

When Leggett was a child, his dad read him a poem. "I understand the large hearts of heroes, the courage of present times... It amazes me that something so beautiful could be a part of something so ugly."

He participated the Normandy invasion as part of 3rd Squad. He parachutes off to Normandy to be temporarily attached with Robert Cole. He soon meets up with Baker and Mac and helped Cole by talking to the French woman with his French to discover their location. Since then, he is attached to Mac since he is the only radioman in the platoon for the whole campaign.

On 9th of June, Mac sent Leggett with Allen & Garnett to flank the farm in the mission 'Buying the Farm' This proved to be a fatal mistake as Allen and Leggett were rivals and their rivalry cause both Allen and Garnett's death which traumatized Leggett. Since then, he is blamed for not saving them by the rest of the squad. Baker forced Leggett to keep Allen and Garnett's deaths a secret since it might cause his squadmates to kill him. Only Corrion, Mac and Baker didn't blame Leggett while the rest of the surviving squad blamed him for their friends death. Leggett since then kept quiet for the whole campaign unless he needed to talk in battle. He still follows Mac around to also distance from his hateful squadmates.

On June 13th, the 3rd Platoon was ordered to help the 506th PIR hold and defend the position outside of Carentan known as Hill 30 to prevent a German counter-attack from taking the town. During the battle, the radio was damaged, stopping any incoming messages from being heard. His call for tank support had been heard, though Leggett would not survive long enough to know.

Because of the events that happened with Allen and Garnett, Leggett lost his mind. He drew a M1911 (known by the platoon as the "Death Pistol") and fired at a German tank, screaming, "You want Me?! Fucking take me! Take me!". The tank fired at Leggett and blew him away, partially exposing his intestines and wounding his face.

His death meant he took the secret of Allen and Garnett's death to the grave. Baker still feels guilt and sees visions of him because he blamed himself for causing Leggetts death by forcing him too keep a secret that broke him. It haunts him during Operation Market Garden and sees hallucinations of Leggett many times like in the Eindhoven hospital where he saw his ghost and heard his voice.

Despite most of the squad hating Leggett for their friends death, Hartsock is able to forgive Leggett and credited him for calling in the tank reinforcement on Hill 30.

Before Leggett had died, he told a secret to a random paratrooper about Allen and Garnett's death. Little did he know, the soldier, Dawson would joined Baker's squad and force him to tell the truth.

Leggett is a shy and nerdy character. He is usually on his own and people find him weird. An example of this is when Baker says that the first time he saw Legget was in the breakfast tent in England during training cutting a hard boiled egg into little pieces. He is also has an interest in literature and comics as he quoted a poem on the beach and discussed comic book characters with his rival, Allen. He is also always with Mac as Mac needs him to contact HQ and he is the only radioman. He is also caring to other soldiers as he wanted to save any survivors in a plane crash or when he tried to save a dying soldier in Hill 30.

However, his personality drastically shifted after Allen & Garnett's death and suffered survivors' guilt. He become weak and vulnerable to other men bulliying him as the other men except Corrion, Baker and Mac in his squad hated Leggett for letting Allen & Garnett die. He become very quiet and suicidal as he didn't talk too much except during combat, a notable example of his suicidal character is the cutscene scene where Leggett screamed at the Panzer to kill him.

Despite being dead, Baker suffered hallucinations and guilt for feeling responsible for Leggett's death as he told Leggett to hold the secret. The personality of Leggett in Hell's Highway is the complete opposite of his personality in Road to Hill 30 and Earned in blood. He appears as a ghost and constantly tormenting Baker for Bakers past actions in Normandy and also during Operation Market Garden. 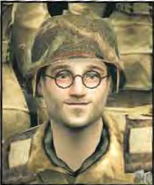 Leggett in Road to Hill 30 Manual 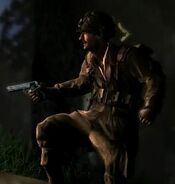 Leggett's had over his guilt and calls out for the German Panzer to kill him.

Community content is available under CC-BY-SA unless otherwise noted.