"No, hang on! Garnett if you get me killed I swear to god I will fucking kill you!"
— Allen to Garnett

James Allen joined up right after high school and struck up an immediate friendship with Pvt. Garnett in boot camp. They were rarely seen apart and pride themselves on their ability to find humor in any situation.

Allen was born in Hartford, Connecticut, and he enlisted in the Army right after high school rather than wait to be drafted. Allen developed a strong and unbreakable friendship with Michael Garnett and they hadn't been apart since. They always had a sly and sarcastic remark for every situation and seem to pride themselves on that fact. He and Garnett often debated with Pfc. Leggett over who was the better superhero, Superman (idolized by Allen and Garnett) or Batman (idolized by Leggett).

Allen is first seen on the morning of D-Day with Garnett. The two always appear together during the rest of the game. High above the Normandy coast, 3rd Squad was set to jump into German occupied France. Their C-47 Skytrain transport aircraft was hit by flak and the entire squad was forced to jump prematurely. Despite the fact most of the squad was scattered badly, both Privates Allen and Garnett managed to stay together and met up with Sergeant Matt Baker and Corporal Joe "Red" Hartsock during the early morning hours of June 6, 1944.

Together they managed to stop retreating German soldiers near Utah Beach. From there, they proceeded on to help secure Objective XYZ among other notable accomplishments.The two are seen operating a bazooka during the battle at "Objective XYZ", neither of them with any great amount of skill.

He is seen on some of the first missions and is under your control on frequent occasions. The first time is at 'Three Patrol Action'. and the last time you see him is at the chateau level, as he died the next morning.

Allen and Garnett both had a rivalry with Pfc. Leggett after an argument over comic book superheroes. However later on in the campaign they were forced to go with Leggett under his command to flank an enemy held farm outside of Purple Heart Lane. In the mission "Buying the Farm" in Road To Hill 30, Private Allen, accompanied by Private Garnett, and Pfc. Leggett attempted to flank the farmhouse using a pincer move. While at the rear the three were ambushed: Allen and Garnett were killed, while Leggett survived. Allen is seen in a trailer for Hell's Highway lying on the ground with Leggett in front of him; when Garnett is sniped, he is enraged and runs toward a German soldier and stabs him in the neck with his knife.

In Hell's Highway, it is revealed that Leggett actually got into a fight with Allen, which resulted in Garnett's death by a sniper shot to the head. Allen kills a German with his knife by stabbing him in the chin before he can react. Allen and is then mortally wounded by a nearby German who shoots him in the stomach. He falls on the ground due to his wound and crawls towards his M1 Garand while the German that shot him keeps firing at him. He proceeds to kill him with the M1 Garand. Finally, Allen kills a final German who goes to his knees in an attempt to surrender after realizing he has no more ammunition (that, or his gun jammed). Allen then looks at the body of his best friend, Garnett, and shoots the pleading German. He apologizes to Leggett, and dies. Leggett then tells Baker what had happened in a flashback cut scene from Hell's Highway. Because Leggett told Dawson the same thing already, Baker had no choice but to tell the rest of the team member about the truth about Allen and Garnett's death. 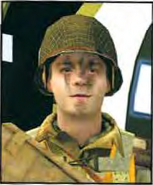 Allen in Road to Hill 30 Manual 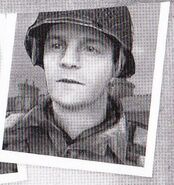 Allen M1 Thompson SAV
Add a photo to this gallery

Retrieved from "https://brothersinarms.fandom.com/wiki/Larry_Allen?oldid=24140"
Community content is available under CC-BY-SA unless otherwise noted.