47.8 in/1,215 mm
M1918 Browning Automatic Rifle is an American light machine gun that is used during WW2. It is also Red's weapon before it broke at Baupte.

The Browning Automatic Rifle, also known as the B.A.R.(pronounced Bee-eh-ahr) was issued as the heavy fire support for a squad. Designed by the famous gun designer John Browning, it was designed to clear the trench in the WWI, like Thompson Sub-machinegun, the war ended before it could see much use. It was first used in anger by Val Browning, John Browning's son, on September 13th 1918; only two months before the end of other war. However, it was the standard issued automatic rifle for the U.S. Marine Corps and the occasional infantry during WWII, the Vietnam War and Korea. In the U.S. the weapon is also used by the both side of the law, especially in Prohibition era, the most infamous BAR users are Bonnie and Clyde, who terrorized the community with their modified BAR. The weapon uses .30 cal or .30-06 Springfield cailber (7.62X63mm, 7.92x57mm for using German rifle rounds or other calibers for export), slow-fully-automatic (450rpm) and fast-fully-automatic (550 rpm), self-loading rifle that held 20-rounds in an detachable magazine. The weapon was praised by many, though it has some drawbacks. After all it is effective and very reliable. The BAR rifle also required specialized training to use, with soldiers trained to use it referred to as 'BAR gunners.'

In Brothers in Arms the player often starts out with BAR on several of the later levels. More commonly used on the Fire Team, it is the favored weapon of Corporal Joe "Red" Hartsock. Though they are not issued to paratroopers on D-Day, Hartsock apparently salvaged it from the wreckage of a crashed Horsa glider near the town of Heisville at dusk on June 6th The Horsa gliders were flown into the fields around Heisville by the 327th Glider infantry to reinforce the paratroopers who, by that time, were likely low on ammo, and equipment. You should keep the BAR with you for most of the time as it is one of the most accurate, powerful, and reliable firearms in the game. In Hell's Highway, the weapon is very accurate and effective at long range if you fire in 1~2 round bursts. Its possible to use BAR as a Designated marksman rifle like the M1 Garand, Kar 98k and Gewher 43. if you can see him you can hit him. The BAR has a slow rate of fire means you can conserve ammo with little difficulty. In Hell's Highway, with 20 magazines in reserve, you really don't need resupply if you use BAR effectively.

The weapon also has a reasonable twenty rounds in its magazine and you cannot find this weapon again halfway through most levels. This weapon has less magazine capacity than StG 44 but the damage per round is higher. You can carry 11 magazines and the other weapons have less, which is another big advantage. The weapon is versatile enough to deal with most firefights. Perhaps the only weak points of the Browning Automatic Rifle is its high level of recoil, which can be countered by firing short yet rapid bursts from the weapon as you would in reality. Due to the power and recoil of this weapon, fire in bursts should bring an enemy down, and if you want, you can fire it like a semi-auto weapon, useful in long range engagements. The M1918 was featured as the 'US BAR', or "M1918A2 BAR" in Hell's Highway.

This weapon is also useful in skirmish mode, especially if you are playing as Axis side, you can receive abundant ammunition from fallen enemies. In-game its closest German counterpart is FG 42

In Hell's Highway, Baker uses this weapon a few times, he carries BAR and M1A1 Carbine in some levels. The weapon is found in "Five-Oh-Sink" and "Written in Stone" mission. The Hell's Highway model is slightly different than the ones found in the previous two games. The BAR performs well at most situations but when you dug in and having close quarter battle with the enemy, the size and the slow drawing speed of the BAR can put you at the disadvantage, so you can treat this as a rifle, and equip a sub-machine gun to back you up,.

Characters who use it[] 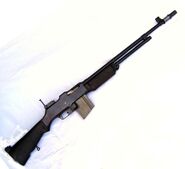