Brothers in Arms Wiki
Register
Don't have an account?
Sign In
Advertisement
in: Road to Hill 30, Earned in Blood, Hell's Highway,
and 7 more
English

"I never asked to be squad leader"
— Matthew Baker

He was a newly promoted Sergeant and led 3rd Squad during the Normandy campaign. He is promoted to Staff Sergeant and became 3rd platoon's platoon sergeant.

Matthew Baker was the son of Colonel Joseph and Julia Baker and was born in Fort Benning, Georgia on February 22, 1921. His parents separated Matt was young. On the day he left, Joseph presented Matt with a custom made, nickel plated, Colt M1911 inscribed "To Matthew: Brothers in Arms". Julia came from a wealthy family and military life did not agree with her, so Matt had to give it back to his father.

Colonel Joseph Baker continued to be assigned around the US Army posts in the US, Panama, and China. Matt only communicated with his father on rare visits and through letters. Baker grew up with his mother in St. Louis, Missouri during the Great Depression.

After the Japanese attack on Pearl Harbor, Matt and George volunteered for the newly activated airborne divisions of the United States Army.

They went through basic training together and both wanted to join the paratroopers. Unfortunately, George broke his leg in basic training and was put into another training class. Matt volunteered for the paratroopers and trained at Fort Benning, Georgia. He was assigned to the 3rd Squad of the 3rd Platoon of Fox Company of the 2nd Battalion of the 502nd Parachute Infantry of the 101st Airborne division, two weeks before D-Day.

Sergeant Saunderson, the squad leader of 3rd Squad broke his leg in a practice parachute jump and Platoon Sergeant; Greg "Mac" Hassay (who knew Baker's father) promoted Corporal Matt Baker to Sergeant and placed him in charge of the 3rd squad.

On June 6, 1944, Baker and his squad parachuted into Normandy. However, as his squad was waiting for the green light to begin the jump, the C-47 was hit by FLaK, killing Private Muzza (3rd Squad's first casualty) and knocking Baker out of the plane. In his first near- death experience, Baker was able to deploy his parachute and landed safely. After he found the nearest road he found "Mac" Hassay and fought with him for most of D-Day.

Throughout the campaign, Baker leads his squad through various battles that claim the lives of most soldiers in 3rd Squad, including the capture of Objective XYZ and of Vierville, Purple Heart Lane, Cole's Charge, the Battle of Carentan, and the defense of Hill 30 on the outskirts of Carentan. To read about Baker's story throughout the game, visit the articles on the levels of Road To Hill 30. .

During the battle on Hill 30, Baker was knocked to the ground by a tank shell and a piece of shrapnel from the explosion left a prominent scar on his forehead. Whilst the other soldiers were fighting, Baker managed to contact the tanks and bring them back to the battle, going round the back and wiping out the German forces. He and the remaining members of the squad went back to Carentan, Baker carrying the dead body of a fellow soldier, Kevin Leggett. He is then present outside Carentan Cathedral where the promotions take place, and where it was cut short by German mortar fire.

Baker appears as a supporting role in Earned In Blood, and he guides and helps Hartsock throughout Carentan. Baker is first seen during "Three Patrol Action". Afterwards, Baker appears at the end when Baker and Hartsock tell their stories to Army historian Col. S.L.A. Marshall.

Baker is again the protagonist in Hell's Highway. After Normandy, Baker's platoon is folded into a brand new Reconnaissance platoon. The recon platoon relies on their jeeps for fast movement through the battlefields to recon and harass enemy positions. The squad is broken up to two teams assigned into jeeps.

Baker is now suffering from too much guilt, and is seeing ghosts of his dead squad members that are haunting him, mostly Leggett. He is then forced by Dawson to tell his men that he knew what had happened to Allen and Garnett in Normandy. The men almost lose their trust in Baker, but after a speech he gives in the final cutscene, all except Corrion, stand by him. Baker also seems to finally have enough with the rumors about his supposed "cursed" pistol and throws it into the woods during his final speech in the game, declaring, "It's just a goddamn gun!"

Baker is usually known as a quiet and reserved man as he usually kept his thought to his own as seen in each chapter intro. He also not confident in his own skill as he 'never asked to be a squad leader'. He also shown to be caring of his own men as he wishes no one in his squad to be killed and treated them as friends and brothers instead of soldier-officer relationship, this partially due to his lack of friends except George when he was a child and his father left him in an age of 8. However, this caused a great emotional pain when one of his squadmates gets killed and felt guilty for not doing anything as seen when Allen & Garnett died during 'Buying the Farm' chapter.

He is also a very brave person as he willing to deal with his enemies alone as he took down a Panzer in St. Come, he charged at mortar team in Foucarville or he enter the church to confront the sniper personally in Leishout.

Despite being a Sergeant, he also shown to have poor decision making when comes to dealing with his own soldiers as seen with his failure to get Franky back in The Rabbit Hole chapter. One of the infamous example is when ask Leggett not to tell what happened to Allen & Garnett's death which ultimately led to Leggett's suicide and Corrion's distrust of Baker when the truth is revealed during Operation Market Garden. 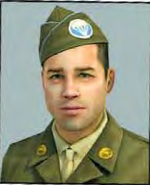 Baker in Road to Hill 30 Manual 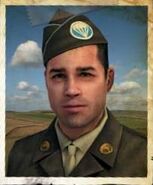 Baker in Earned In Blood Manual

Baker reveals to Red that he will not be able to walk again.

Baker as he is fully geared up.

Baker in the interiors of Carentan, trying to defeat the remaining German stragglers.

Drawing of Baker from the Hell's Highway Novel.