Private Michael Desola was part of Baker's Dozen and he was a private. He died a gruesome death when a bomber hit the bridge at the causeway.

Desola had three passions in life: fighting the Germans, playing baseball, and Italian food. He wanted to go back to Philadelphia and one day take over his family's Italian restaurant from his father.

Desola was from South Philadelphia, and has 12 siblings. Desola grew close to Hartsock in training, sharing stories of bar fights. Desola spent his 20th birthday on a boat in the middle of the ocean, and was known to be complacent even in the face of death.

Desola becomes part of the squad and stays with Baker throughout the game. After Third Platoon's plane was hit by a German FlaK, the squad jumped in disorder, leaving them scattered around an area several miles in diameter. Desola was one of those men, linking up with his sergeant; Matt Baker, with Corporal Corrion two days after the parachute drop outside Saint Côme-du-Mont. Desola is part of Baker's team throughout most levels on Road To Hill 30.

Desola also plays a prominent role in Earned In Blood too. He is first seen in Château Colombières, where he; Allen and Garnett accompanied Corporal Hartsock; acting leader of the battered Second Squad, in taking over Château Colombières, a large piece of land renovated by the Germans as a command station for Colombières.

The next morning on June 9th, Allen and Gernett would be killed by a German Fallschirmjaeger while on patrol with Private Leggett. This prompted a number of arguments over if Leggett was a traitor. Desola, who was friends with the deceased, held a grudge against Leggett.

The next day on June 10th, 3rd Platoon reached Highway N13 on their way to Carentan on June 10th, where they met Lt. Col. Robert Cole and their comrades of 3rd Battalion. After running across an open field and escaping the German riflemen on the other side of the Douve River, the survivors prepared to crawl through the Belgian Gate to reach the other end of a bridge.

Meanwhile, a Junker Ju 87 (known to the allies as the "Stuka dive bomber") flew over the area and bombed the bridge. One of the bombs hit and killed Desola and a few others, ripping his torso open and leaving a horrific and bloody corpse for 3rd Platoon to witness as they climbed through the wrecked bridge.

Upon finding his body, Hartsock, a good friend to Desola, threw his helmet into the river. Desola's body was left on the bridge as the other men charged through the field and made camp in the barn. There are several bodies under sheets at the base but it is unknown whether one of them is Desola's as his may have had too much blood/gore and was too far away to carry.

Never Got the Chance Edit

Desola wanted to take over his family's Italian restrauant, but he got killed, so he never got that chance. 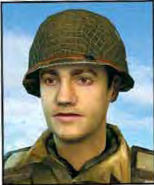 Desola in Road to Hill 30 Manual

Retrieved from "https://brothersinarms.fandom.com/wiki/Michael_Desola?oldid=24511"
Community content is available under CC-BY-SA unless otherwise noted.