Michael Garnett was born in Kentucky to Caroline Garnett and jokes to everyone that he's the 'boy from nowhere'. Garnett was a dock worker on the Ohio River before enlisting in the Army. Garnett developed a strong friendship with Larry Allen in their first week of boot camp, and they always have been close friends ever since.

Garnett is first seen in the morning of D-Day with Allen. The two always appear together during the rest of the game. They have a sly and sarcastic remark for every situation and seem to pride themselves on that fact. Garnett is under your control for the majority of the game and he plays a leading role.

Garnett is first seen during the "Three Patrol Action" where he and Allen join Hartsock's squad. In the "Hell's Corner" mission he is seen separated from Allen for the first and only time. The last time you see him is at the chateau level.

In the mission "Buying the Farm" in Road to Hill 30 Private Garnett, accompanied by Private Allen, and Pfc. Leggett attempt to flank the farmhouse by using a Pincer Move. While around the back the three were ambushed and Allen and Garnett were killed while Leggett survived.

Hell's Highway features the secret story of what happened. Garnett is featured in Hell's Highway quite frequently. It is revealed that Garnett was sniped while holding the 'death pistol' after a verbal and physical fight between Allen and Leggett attracted the attention of three German soldiers. 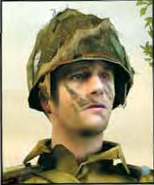 Garnett in Road to Hill 30 Manual 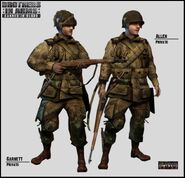 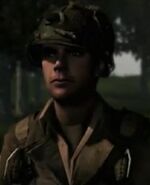 Garnett along with a paratrooper, as they advance past Dead Man's Corner.
Add a photo to this gallery

Retrieved from "https://brothersinarms.fandom.com/wiki/Michael_Garnett?oldid=23755"
Community content is available under CC-BY-SA unless otherwise noted.