Brothers in Arms Wiki
Register
Don't have an account?
Sign In
Advertisement
in: Articles Needing Cleanup, Road to Hill 30, Earned in Blood,
and 8 more
English

Corporal Samuel Corrion commonly known as Sam, is a soldier in Baker's 3rd Squad Assault Team. He later had a falling out with Staff Sergeant Baker after he was passed up for promotion for Sergeant, this being the fourth time.

Around 1934, when he was 16 years old, Sam made a living working at a textile mill in Georgia. With the United States joining the war at the end of 1941, Sam signed up early on at his own free will, and it was only in December 1942 that voluntary enlistment in the United States was replaced by conscription, becoming one of the original volunteers for the 101st Airborne Division when it was founded in August 1942.

High above the Normandy coast on June 6th, 1944, Corrion and the rest of his squad were getting set to make the jump into German occupied France. Before Corrion had the chance to jump, a flak shell hit the engine on Third Squad's C-47 Skytrain transport aircraft, which killed Private Muzza and knocked Sergeant Matthew Baker out of the aircraft.

Staff Sergeant Greg "Mac" Hassay ordered everyone out of the aircraft immediately afterwards and Corrion began his descent into the battle for Normandy. Hassay got word on June 7 that Corrion, along with Private Desola, were alive and had groupped with other men of the 506th during the misdrops. It is unknown what exactly Corrion went through when he touched down but Sam only reached his unit's position just south of St. Come-du-Mont between the end of June 7th and the very early hours of June 8th. Sam fought with Baker through Normandy, attempting to save Rivas after he was sniped.

Corrion is first seen during "Three Patrol Action", where he is in Baker's squad. To avoid German troops from spotting him he had to hide in a cesspit, getting himself covered in dirt.

In the game Brothers in Arms: Earned in Blood you get to see some of what Corrion experienced on the off missions of Road to Hill 30. Seeing the game through the eyes of Sergeant Joe "Red" Hartsock you get to see that not everything was fine with Corrion. From having to hide in a cesspool to avoid German troops from seeing him, starting to question whether or not Baker was jinxed (though it could have been biased on Hartsock's part during the interview), and if anybody in Third Squad would make it back to England. According to the instruction manual for Earned in Blood, Corrion believed that he should have gotten the promotion to Sergeant over Hartsock.

Corrion plays a much bigger role in Hell's Highway, and is Baker's assault team leader for most of Operation: Market Garden. He is still a Corporal.

After Hartsock is paralyzed, and second squad is without a leader, Corrion is once again turned down for promotion and Paddock is chosen to lead second squad instead. A distraught Corrion confronts Baker, but his sergeant defends his decision by explaining he couldn't keep Frank LaRoche from running away in to the destroyed Dutch town.

When Baker is asked to choose a substitute for Hartsock (that has been wounded) he answers "Paddock", so Corrion (which was hearing) asks Baker why he didn't choose him. Baker, still shocked by Franky's death, answers: "'It's my job to keep you alive. You follow orders or you die.' Those are your words. I heard you say them to Franky[...], and he died in my fucking arms because you couldn't make him understand."

Later, when the 3rd squad attempted to reopen the Hell's Highway, Corrion is shot in the stomach by a stray bullet and Courtland takes his place. He is rushed to hospital, unconscious. Sam survives the wound and walks out of the medical tent to confront Baker. He expresses his anger at Baker's lie about the true cause of death of Allen and Garnett, and claims he no longer wants to fight under Baker's leadership. When Baker then does a speech, Corrion then walks away quietly, and the final shot is of Corrion and Baker. It is unknown how- or even if- he will leave the squad. 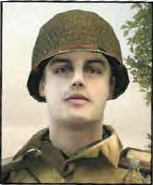 Corrion in Road to Hill 30 Manual

Corrion as he appears in Earned in Blood

Corrion during the approach on the industrial parts of Carentan