Brothers in Arms Wiki
Register
Don't have an account?
Sign In
Advertisement
in: Characters, Road to Hill 30 Characters, 3rd Squad,
and 2 more

Obrieski was born in Warsaw, Poland, and emigrated to the United States, leaving his parents behind. After the Japanese attack on Pearl Harbor, Obrieski volunteered for the newly-activated airborne divisions in the hopes of truly earning his American citizenship. There he was assigned to 3rd Squad under Sgt. Baker. As the war progressed, Obrieski and the rest of the 101st Infantry Division were moved to England to train for an invasion of France. He had hoped to find his family in Poland after the action in France, if they had survived the Nazi occupation.

On June 6 1944, Obrieski and his squad were flown over the Normandy countryside. The three battalions of the 502nd Parachute Infantry Regiment were all to land in and around Saint-Martin-de-Varreville, with Lt. Col. Robert Cole and Steve Chappuis' battalions being instructed to take out coastal artillery in aide of the 4th Infantry Division arriving at Utah Beach. As a result of foggy weather, the paratroopers were misdropped and much of the 502nd landing miles away from their objectives. As a result, Obrieski only reached his unit four days later when their initial objectives had been completed.

On June 12th, 3rd Platoon entered Carentan and occupied its Église Notre-Dame de Carentan, with Obrieski entrusted with a bazooka should German tanks arrive. However, due to the apparent lack of any German forces in the area, Obrieski discarded his bazooka, smoked a cigarette and joked about drinking champagne to celebrate victory.

It was just after this that a German sniper hit him through the head, apparently at some distance since his comrades only heard the gunshot after his death. The others saw his body fall straight off the top of the church as the German forces arrived. His body is seen covered with a sheet of white cloth at the last scene of RTH 30. His helmet is left on the tower, stained with his blood. After his death, he is never mentioned throughout the game.

Never Got the Chance[]

Obi hoped to find his Family in Poland,but because he got killed in Tom and Jerry,he never got that chance.

A screenshot of Obi 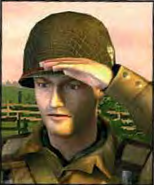 Obi in Road to Hill 30 Manual

Obrieskie talking with Zanovich and Hartsock, giving a German sniper an advantage because he stands near the ledge of the tower.

Community content is available under CC-BY-SA unless otherwise noted.
Advertisement