Edit
watch 01:40
The Sandman Will Keep You Awake - The Loop
Do you like this video?
Play Sound

"In Holland, the horn still means get out my fucking way!"
— Zano in the jeep with honking to some paratroopers

Thomas Zanovich was born into a Czech family. He ran away from home at the age of sixteen and served in the French Foreign Legion. Zanovich fought as an infantryman in the 13th Demi-Brigade (Battalion) of the Foreign Legion at Narvik and Bjervik in Norway. He was also present at the evacuation of Dunkirk in 1940 and; with his enlistment up, made his way back to the United States to join the US Army after 7 December 1941.

Private Zanovich joined the 101st Airborne Division and was eventually moved to England with the rest of his unit to train for the initial invasion of Normandy, "Operation Overlord." At this time Zanovich was a Private First Class and was in the 3rd Squad's Fire Team. Zanovich, and Pfc. Obrieski were good friends and often discussed if they would ever return to their fudge and cake.

After one of 3rd Platoon's C-47 was hit by shrapnel from one of the incoming flaks, the occupants hastily evacuated (with the exception of David Muzza, who had been killed by the impact) the burning plane.

Scattered like many others in his platoon, Zanovich finally linked up with Sgt. Baker on D-Day+3, accompanying him during a mad dash across a sniper-laden zone at Purple Heart Lane, Zanovich then stayed with Baker until the Battle of the Blood Gulch, also known as "Hill 30".

Zanovich, along with Courtland, is not included in the Earned In Blood game, but the only time he is seen is briefly on the plane in front of Hartsock.

Between the liberation of France and the invasion of the Netherlands, Zanovich was promoted to Corporal and seen again in game. Zanovich plays a considerably bigger role now and he is the Fire team leader. He usually drives the jeep with Baker and the Fire team, and like Paddock, is shown to have a strong sense of hatred toward the jeep columns. 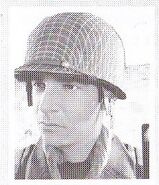 Zanovich from the Hell's Highway manual

Zanovich with Leggett and Mac

Zanovich during the Battle of Bloody Gulch